Pushed to the ground, I woke and just has I tried pulling myself up, she pinned me down, stern look on her face but the guy spitting out the orders was the one who got me worried. He looked mean, scarred face and built, clad in a semi-military uniform arms and ammunition in there appropriate places. “Hey! You should think twice before trying to do something really stupid, you know?” He spoke in a distant tongue but I understood… weird right? Exactly, he looked Fulani-like with muscles and yet he looked at me with this familiar grimace.

The knot was quite hard; I was tied to the bed side. A broken skull was on the bed, the mattress was stained.

Blood, I gulped in a sizable amount of saliva and then it the first stroke, a punch, she threw them like ice cubes. It was felt but not much pain was involved. Then came the rush, she delivered it then gave him a stare; he wasn’t satisfied. Instant worry came over me, and then I squeezed my bleeding lips for more blood then spat it out. He looked at me; smiled and then he stood me up. He had been waiting for this, I could tell he stretched his neck, flexed his muscles and tightened his gloves. If he was trying to get me scared, he shouldn’t bother for he’d established that from the onset.

“In a few minutes, we’re going to start questioning you, just so you know… the torture is so you don’t waste our time” I nodded. Wish I could say something but my heart kept beating and the words kept coming out like stutters. He stood firmly, flexed his shoulder for the final time and then his arm reversed backwards, I could see the muscles, sweat embedded, dripping has the glove breezed through the air; everything happened so fast, I noticed he had tattoos, I could see his armpit and a clash of hardcore knuckles and soft growing tissues. Gbam!

“Aaaahhhhhhhhh!” I yelled… in pain!

Fuck! That was harsh, compared to the ice cubes, She shook her head for me and I was sure not to allow it repeat itself, how? I couldn’t say but then he straightened my head, wiped the blood and his arms were getting ready for another round. I couldn’t take it anymore. He smiled and said “This is the last one, I promise!” of course I said.

This time his arms were fast but I was prepared, I saw the gloves approaching, opened my eyes and “stop!” I mumbled inwards he froze, his arms were stuck, he tried moving ‘em but then he turned in that same froze state. Now facing the ice cube lady, somehow she met the punch halfway and then she collapsed. The big guy tried turning his neck at me but he got elevated off the ground and he slammed himself into the walk.

I stayed focus till they were knocked out. 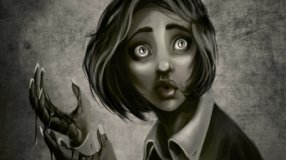 It must have been a dream; all I could remember was the need to stand strong. The wind was heavy, quiet heavy I must say. It was dark, I was in the forest or some jungle but I remember wearing a blue T-shirt with a Mickey Mouse designs and a jean trouser with my Vans footwear. I wasn’t really bothered about the fashion but I had just gotten to my feet. The past was a blur and how I got there unknown. I turned, tried to find my bearing but it was too dark to navigate.

Footsteps, I tried to locate where it came from but it was swift and then silence. I moved to the nearest tree, even the trees had some sort of feel like it was aware that I had touched it. Only if I could understand this scenario, because I wasn’t scared that I was sure of.  I rarely do but I was unsure of my present circumstances. I heard the footsteps again now, it was clearer now and more than one person, four maybe but I was in bushy part so it could be anything.

I must have felt too comfortable with the tree but the next surprise… I wouldn’t have fathomed at all. “You should find another place to hide”, the voice said and I really didn’t bother to find out who or what was talking but my Vans were at work for the very first time. Not the strolling typa-work but my Vans could run. Fast too.

Only after a while did it take me to realize I wasn’t the only one running; they were fast and that was when I heard the first bark. Then another and then several; shocked installed itself in my bones. I must have ran a mile then I got myself into a swampy terrain, tripped over a pile of twigs and leaves then came the downward spiral. Rolled sluggishly, the pain came in slowly my eyes stuck to the chasing dogs. But they were gone, gone like they were never around. At least now for some reason I was safe, wet but safe.